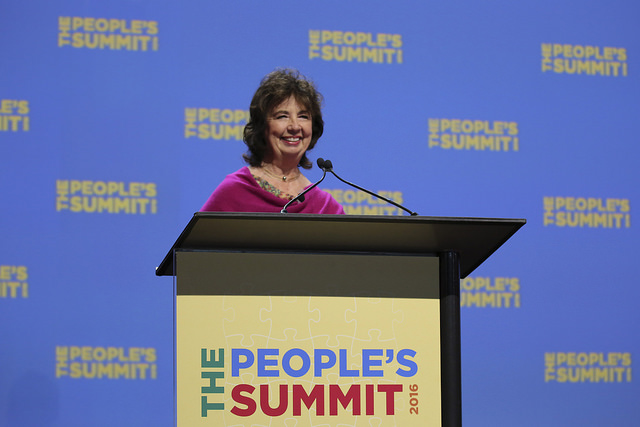 The executive director of a major nurses union, which provided substantial support for Bernie Sanders’ presidential campaign, spoke to the Democratic platform committee on June 17. She advocated for single-payer universal healthcare in the United States. But two of the platform committee members attempted to intimidate the executive director by suggesting she did not care about those who had been without health insurance and benefited from the Affordable Care Act (ACA).

Speaking later at the People’s Summit in Chicago, National Nurses United President RoseAnn DeMoro said members of the committee tried to “box” her in and say the ACA was good enough, and that it was not possible to achieve a single-payer healthcare system.

Representative Barbara Lee, who was appointed to the committee by Democratic National Committee chairwoman Debbie Wasserman Schultz, said, “Every single Democrat in the House, we fought very hard for either single-payer or public option. We got as much as we could get as Democrats. We put in the bill states have the option to enact single-payer. We put some public option language in the Affordable Care Act that may not have been strong enough. The political dynamics weren’t there on the outside to do that.”

“I have to say today that Democrats fought very hard for single-payer and public option. Now close to 20 million have healthcare now as a result of the Affordable Care Act. That’s a big deal,” Lee added.

It should be noted that the Democratic Party’s position on the public option, in particular, is a bit more complex than Lee suggests. Despite campaigning on a public option, President Obama infamously killed it in early negotiations with the insurance industry.

Whip counts showed there were enough votes to pass a public option in the Senate, but Democratic leaders chose instead to impose self-limitations and let Joe Lieberman and Blanche Lincoln write a deeply unpopular bill—one that arguably contributed to the party’s massive losses in the 2010 tea party wave. The Democratic National Committee would later publicly defend spending $460,000 on an advertisement for conservative Nebraska Democrat Ben Nelson’s re-election campaign, which celebrated his role in making sure insurance coverage under the ACA would not be “run by the government.”

Lee asked how the ACA should be built upon, without “messing with the people who now have coverage in the Affordable Care Act”—an extremely disingenuous question given the fact that a universal single-payer healthcare system would cover every single American or not be worth implementing at all.

DeMoro answered, “I see the dynamic that is happening here, and you think I’m criticizing the Democratic Party for not fighting hard enough for a single-payer healthcare system, and that’s probably accurate.”

After nervous laughter at this point of contention, Lee declared, “We fought very hard and I know that for a fact.”

DeMoro argued the government cannot “piecemeal” healthcare and keep adding provisions, which make the system more fair to citizens. “I don’t want to have that on my conscience that anyone has died because I didn’t have the political will to fight.”

Lee would not back off. She reiterated, “I just want to make sure that the people who are covered by the Affordable Care Act have your support and you fight for them too.”

This prompted DeMoro to amplify her critique of the ACA.

“It allowed basically the same conditions that were in play before to actually be accelerated in some ways. Privatization is happening. Mergers and acquisitions are at an all-time high. People are having to pay twenty-five percent more for their premiums. Their co-pays are going up,” DeMoro said.

“The healthcare industry is scamming the ACA. That really is what’s happening. So, even the intent is falling short because they’ve got rooms of accountants and all of the players in healthcare that are figuring out how to game the system.”

Tanden also attempted to nail DeMoro for supposedly being insensitive and said don’t forget the “voices of people, who have healthcare, who are alive today because of the Affordable Care Act.”Prior to Lee’s questions, Neera Tanden of the Center for American Progress, who was appointed to the committee by Hillary Clinton, tried to entrap DeMoro by arguing part of Germany’s healthcare system involves for-profit care, suggesting it must not be all that terrible that the U.S. would have for-profit care as a part of the country’s healthcare.

“I just want to have the voices of people, who have waited a long time for healthcare, and have it today because of the Democratic Party [to be acknowledged],” Tanden stated. She pleaded with DeMoro to concede passing ACA was “no easy task” for Democrats.

“You are not going to ever corner the nurses into saying it’s adequate,” DeMoro responded.

DeMoro said in her remarks, before questions, that the ACA certainly was an “improvement.” She did not ignore the fact that it forced insurance companies to cover people it previously had denied coverage. Yet, DeMoro made it clear that the ACA, as well as what Clinton has proposed in order to make ACA more transparent, is wholly inadequate.

According to DeMoro, nurses are crying on the job. They have patients, who are cutting medications. They cannot afford to go to the doctor. “We have to have a commitment to provide the care people need and to not charge them for staying alive.”

To the issue of how to pass single-payer healthcare, DeMoro cited a poll indicating fifty-eight percent of Americans support such a system. She suggested Democrats learn from the Sanders campaign and go out into the population to agitate, organize, and ask communities to support universal healthcare for all.

Lee and Tanden carried on a dishonest attack promoted by the Clinton campaign against Sanders. Early in the primary, Clinton suggested if a single-payer healthcare system was implemented Americans would lose their coverage under ACA. That is scaremongering for the benefit of the health insurance and pharmaceutical industries.

Yet, as DeMoro asserted, it did not work. She believed Lee and Tanden were on the defensive and were reacting to the power of a growing movement. And she made it clear, “When you make a compromise in healthcare, you’re basically issuing a death sentence because you’re saying lives don’t matter.

Here’s RoseAnn DeMoro’s full testimony on the need for single-payer healthcare, which she submitted to the DNC Platform Committee:http://www.nationalnursesunited.org/press/entry/nurses-call-on-drafting-committee-to-place-medicare-for-all-and-opposition/