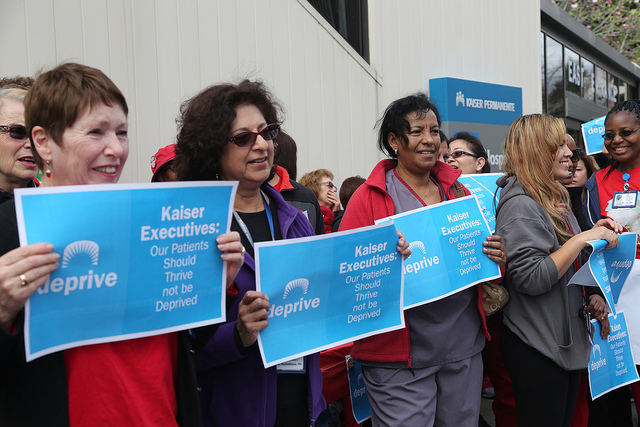 Kaiser Permanente registered nurses hold a vigil to denounce major patient care reductions proposed for the new Oakland facility which is currently under construction and expected to open this summer.

More than 200 Kaiser Permanente RNs rallied outside the Kaiser Permanente Oakland Medical Center Thursday afternoon to sound a public alarm about patient care reductions the HMO giant is proposing for its new Oakland facility which is expected to open this summer.

Waving signs reading, “Kaiser executives: Our patients should thrive not be deprived,” the RNs said their daily experience shows a stark contrast with the HMO giant’s multi-million dollar “thrive” ad campaign. They described substantial problems with short staffing and cuts that come at a time when Kaiser is making record profits and adding 95,000 new enrollees through the Affordable Care Act exchanges.

In unified voices echoing across the busy hospital entrance, the RNs, members of the California Nurses Association/National Nurses United, sang out, “Kaiser: safe staffing now,” and “Chop from the top.”

“What we are doing today will have a ripple affect that will travel all the way to the White House because Kaiser is the leader in the healthcare industry and golden benchmark for the Affordable Care Act,” said Kaiser Oakland RN Clarita Griffin. “This is bigger than Oakland, bigger than California. That is why we are here to send a loud and clear message to Kaiser to thrive, not deprive.”

Over the past year, Kaiser Oakland RNs have filed more than 1,400 reports to hospital managers of what they believe to be unsafe care, double the number of such reports the previous year. The filings, they say, reflect examples of how patient care has suffered as a result of fewer RNs and point to the growing patient care crisis at the Oakland facility.

CNA Co-President Zenei Cortez, a Kaiser South San Francisco RN, noted that Kaiser made $2,7 billion in profits last year, yet is continuing to make cuts in staffing and patient services. “They make profits off the backs of the sick, and that’s not right.”

In Oakland alone, Kaiser is attempting to cut 75 nursing positions in the move to the new hospital. But RNs across all units said that they are responsible for more patients per shift than ever before. The reduction in direct-care RNs comes at a time when six out of 10 insured Californians have Kaiser, a number that is expected to increase significantly under the ACA.

“We're out here today because we're getting ready to move to the new Kaiser Oakland facility and the current conditions are already difficult,” said Katy Roemer, a Kaiser Oakland RN and CNA Board member. “We have insufficient resources, patients are facing long waits in the emergency department, they are put in ‘observation’ instead of being admitted and they are put in lower levels of care than what they require.”

“Kaiser has proposed cuts in the nursing staff for the new hospital and we're already understaffed in the current facility,” said Oakland RN Yolanda Owens.

“Every single day we're talking about how are we going to manage the new hospital if this is what's already happening,” Owens said. “There is a lot of turnaround, patients returning three days in a row, discharged and back the next day. And some of the people who are at home really need to be in the hospital. All we're asking is take care of the patients. This is not a fast food business. We're trying to be holistic in our care but we don't have the tools and the time. It's a factory.”

“They have this logo that says ‘Thrive,’ but if we're understaffed we can't thrive.  Members pay their premiums and they deserve the care,” said Owens. “We have to fight to deliver the product that Kaiser promises the members.”

Among the cuts cited at Kaiser Oakland:

View photos from the rally!